Barbican Theatre is delighted to announce final cast member of their open air version of Shakespeare’s Macbeth, four of whom appear in their official trailer to be released on 31 May.

The fourth production in our popular ’Bard in the Yard’ programme, Macbeth follows three hugely successful previous summer productions of A Midsummer Night’s Dream (2015), Romeo & Juliet (2016) and Twelfth Night (2017). This highly visual and accessible version will be produced in the stunning Residence One Garden at Royal William Yard from 31 July – 11 August.

Macbeth is part of Barbican Theatre’s commitment to creating high quality, accessible work while supporting and developing local talent. Earlier this year we announced the lead actors as Hassan Maarfi (Macbeth) who is currently touring Europe with the prestigious Vienna’s English Theatre and Seren Vickers (Lady Macbeth) who is currently performing in Katell Keinig’s Highway One at Wales Millennium Centre.

Joining Hassan and Seren are six emerging and dynamic actors who, as an ensemble, will play a number of parts including Banqo, King Duncan, McDuff, and of course The Witches!

Abigail Cowan trained with The Actor’s Wheel at Plymouth Marjon University where she performed as Prospera in their regional tour of Shakespeare’s The Tempest. She is an artist skilled in a number of areas and has worked with Le Navet Bete, Scratchworks and Youth Music Theatre in a variety of roles.

Alexander Dover joins us from his training at East 15 Acting School. He has experience in Shakespeare performance, having played the title role in Richard III, and Malvolio in Twelfth Night. In 2014 he was a member of Theatre Royal’s Young Company, Barbican Theatre’s COMPANY b and the prestigious National Youth Theatre. Other titles Alexander has performed in include Chekov’s The Seagull, Harold Pinter’s Betrayal and Tracy Letts’ August: Osage County.

RADA and University of Exeter trained Ruan Evans has performed in The Wars of The Roses (John Barton’s adaptation of Shakespeare’s Henry VI Part I, II, III and Richard III) at the highly regarded Rose Theatre in Kingston. He is currently performing in Thomas Middleton and Thomas Dekker’s The Roaring Girl.

John Inkerman trained at East 15 where played Oberon in their production of Shakespeare’s A Midsummer Night’s Dream at the Corbett Theatre. He was a member of Theatre Royal’s The Lab Company from 2016-17 where co-founded the highly regarded Narwhal Ensemble, who have recently toured the South West. He has also been a member of the prestigious National Youth Theatre. John is also a talented musician and songwriter who plays guitar, bass, mandolin, ukulele, piano and drums.

Danny Laine is currently in his second year at Plymouth Marjon University where he is training with The Actor’s Wheel. He played Cornwall in their regional tour of Shakespeare’s King Lear in 2017 and has recently returned from Greece where they toured Kimberly Sikes’ Children of The Birds. Danny also appeared in our 2015 production of A Midsummer Night’s Dream as Flute. 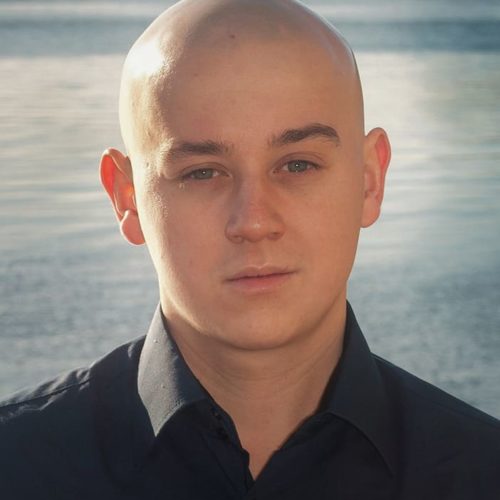 Bard In The Yard regulars may remember John James McColl from our very first production of Shakespeare, A Midsummer Night’s Dream where he played an extremely memorable and hilarious Bottom. He followed this with a second Bard In The Yard appearance as Benvolio in our Romeo & Juliet in 2016. John James trained with The Actor’s Wheel at Plymouth Marjon University, where he played Caliban in their regional tour of Shakespeare’s The Tempest. He has recently performed in Pilots Thumb’s tour of Yezno.

Barbican Theatre’s open air production of Macbeth is being directed by Jo Loyn and will be set in a timeless, modern context where we’re encouraged to ask ourselves ‘who are the witches of our times?’ For the first time in its four-year history a #BardInTheYard trailer has been produced. The trailer features Abigail Cowan, John Inkerman, Danny Laine and John James McColl and was filmed and directed by Zoe Bloss at Royal William Yard. The trailer can be viewed here.